Americans are typically barely aware of things up north: there's usually nothing happening in America’s attic. When reminded, we tend to think of Canadians as unfailingly polite, slightly goofy, somewhat condescending, and wholly irritating. Irritating, because we've realized that the Canadians have sent us Justin Bieber, Celine Dion, Jim Carrey, Neil Young and James Cameron, and now refuse to take them back. Bastards.

They’re also our neighbors involved in a daily struggle for gun rights.

Canada is usually assumed to be a largely disarmed nation, similar to England, Australia, and New Zealand.  Actually, Canada has a long tradition of hunting and self-reliance, a significant number of firearms owners, ever growing target, clay and action shooting cadres, and the frontier’s self-reliant sensibilities. As Canada grew and “civilized”, there was the usual pull of rights into government control, resulting in an authoritarian series of registration requirements, permitting and handgun and long gun restrictions. To resist the government’s grasp, a vibrant rights community has sprung up, defending and even reacquiring lost rights. 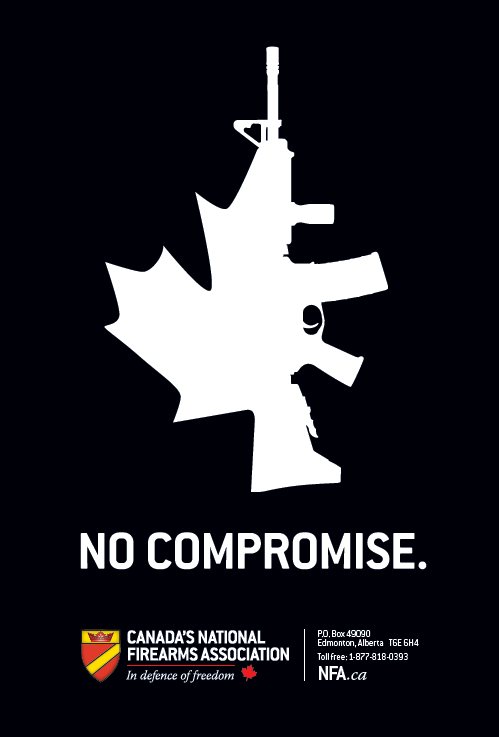 Canada has no Constitutional protection of the right to keep and bear arms; the defense of firearms rights is purely political. There’s also no Gun Culture 2.0 as exemplified by the American concealed carry movement, so the resistance must center on the hunting and sports communities. The Canadian Shooting Sports Association (CSSA) and National Firearms Association (NFA) are the major rights organizations above the border. Both orgs struck a blow for freedom with the recent elimination of the expensive and largely useless national Long-Gun Registry. The NFA has struck a cord with their aggressive “No Compromise” stance. It’s good to know that Canadian citizens have such snarling watchdogs on their side.

A wood-fired Intranet is embraced by Canadians as a natural tool in the defense of their rights. There’s a bunch of uniquely Canadian forums, blogs, podcasts, and magazines. Some standouts include the Canadian Gun Nutz forum, and the Slam Fire Radio and Action Shooting Radio podcasts. The ‘casts are especially worth a listen, but be sure to have your toque screwed on tight. Take a look at The Hunting Gear Guy for his long list of gun tinged forums.

The right to self-defense and the attendant right to keep and bear arms is a human right. Those rights go far beyond the US borders. We should be aware and supportive of the efforts of our brothers and sisters in the Frozen North.


They are the Eh-Team when it comes to defending Canadian firearms rights.

Posted by Charlie Foxtrot at 9:29 AM